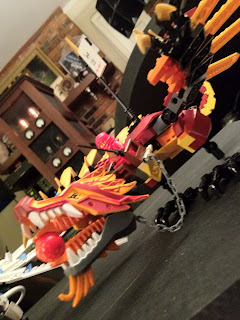 yeah... I still dig building with Legos... JP always starts building by the books... that drives me crazy.. I am pure freestyle... but when he took these pictures, well, I began to see why he does it like he does... it is kinda like building your own audio gear.. it makes you invested.. adds a bond.... makes you care even more... it makes you sweat the details... 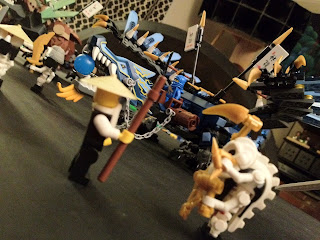 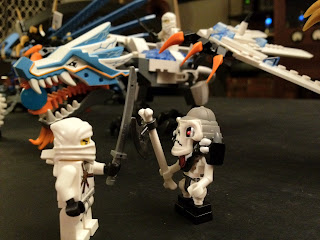 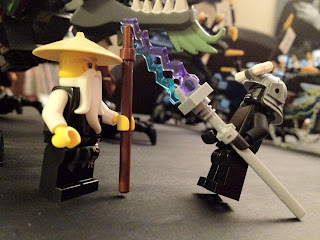 show me your new vinyl!

I am spoiled... and it is therefore extremely difficult to buy gifts for me... I have any tube I really need... and to even think about something along those lines is to get into really obscure geekland... but I am blessed with a wife and family who listen... so this is what they got me.. check these out! 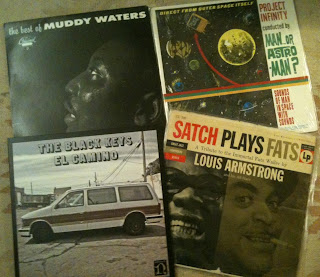 I know most of you have the super over released Folk Singer from Muddy Waters, and that is a phenomenal album, but this is his best from the early Chess years... I did not own it on vinyl.. and have nearly killed a hard drive calling this compilation over and over again... to say that I cannot afford teh stack of original 78's goes without saying, but this reissue sounds *WAY* better than my digital copy... this is serious dancing music... I often make a fool out of myself playing this one..

the Satch Plays Fats is another that I only had a digital copy of... not sure why.. I guess I always assumed it would be expensive due to age... but MZ showed me that it is out there.. I know every word to every song.. know the notes coming on teh solos.. Lisa and I both pull this one.. so it is nice to have a vinyl copy.. it makes it extra yummy...

Man or Atroman is modern surf rock.. I super dig these guys.. it is somehow mixed with a little REM sound in there.. "jangly guitars" as Lenwood would say.. highly recommended... but you can listen here for yourself first... check out the video by Sarah Jacobsen, an artist herself...

and last but not least is The Black Keys... I have already written about them here.. and I dig the new album.. more soul.. and back to some tunes that will absolutely ROCK live... I hope they swing south...

so I am super glad the family listens when I mumble about needing a vinyl this or a vinyl that... oh, and they wisely bought me a new green hoodie to replace my ten year old beater that has seen use and abuse... and they know me well enough to not buy one with a logo so large that it makes me a billboard... ahh... in cognito... my favorite.. 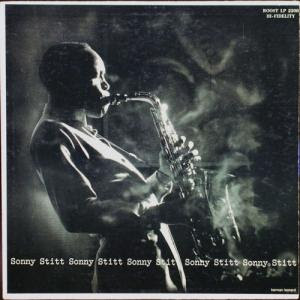 This one was hard... I read this a week ago... it really resonated... tough, but I think very correct...

There maybe cool individuals who say they play Jazz, but ain’t shit cool about Jazz as a whole.

Jazz was a limited idea to begin with.

Jazz is a label that was forced upon the musicians.

Ornette tried to save Jazz from itself by taking the music back to its New Orleanian roots, but his efforts were too esoteric.

Jazz is only cool if you don’t actually play it for a living.

Jazz musicians have accepted the idea that it’s OK to be poor.

John Coltrane is a bad cat, but Jazz stopped being cool in 1959.

The very fact that so many people are holding on to this idea of what Jazz is supposed to be is exactly what makes it not cool.

People are holding on to an idea that died long ago.

Paul Whiteman was the King of Jazz and someday all kings must fall.

Stop fucking the dead and embrace the living.

Jazz worries way too much about itself for it to be cool.

The number one Jazz record is Miles Davis’ Kind Of Blue.

Dave Brubeck’s Time Out was released in 1959.

Jazz is haunted by its own hungry ghosts.

You can be martyrs for an idea that died over a half a century if y’all want.

Jazz has proven itself to be limited, and therefore, not cool.

Lot’s wife turned to a pillar of salt from looking back.

Some may say that I’m no longer the same dude who recorded the album with Doc Cheatham.

Correct: I’m not the same dude I was 14 years ago.

Isn’t that the point?

Our whole purpose on this planet is to evolve.

The Golden Age of Jazz is gone.

Too many necrophiliacs in Jazz.

You’re making my case for me.

Some people may say we are defined by our limitations.

I don’t believe in limitations, but yes, if you believe you are limited that will define you.

And if you find yourself getting mad, it’s probably because you know Jazz is dead.

Why get upset if what I’m saying doesn’t ring true?

I can’t speak for anyone else, but I don’t play Jazz.

I am a part of a lineage.

I am a part of a blood line.

I don’t let others define who I am.

I am a Postmodern New Orleans musician.

I create music for the heart and the head, for the beauty and the booty.

The man who lets others define him is a dead man.

With all due respect to the masters, they were victims of a colonialist mentality.

Blacks have been conditioned for centuries to be grateful for whatever crumbs thrown to them.

As a postmodern musician, it’s my duty to do better than my predecessors.

To question, reexamine and redefine what it is that we do.

They accepted it because they had to.

Because my ancestors opened the door for me, I don’t have to accept it.

Louis bowed and scraped so Miles could turn his back.

It’s the colonialist mentality that glorifies being treated like a slave.

There is nothing romantic about poor, scuffling Jazz musicians.

Jazz is a lie.

America is a lie.

Playing Jazz is like running on a treadmill: you may break a sweat, but ultimately you ain’t going nowhere.

Some people may say we are limited.

I say, we are as limited as we think.

I am not limited.

Jazz is a marketing ploy that serves an elite few.

The elite make all the money while they tell the true artists it’s cool to be broke.

I am not speaking of so-called Jazz’s improvisational aspects.

Improvisation by its very nature can never be passé, but mindsets are invariably deadly.

Not knowing is the most you can ever know.

It’s only when you don’t know that “everything” is possible.

Jazz has nothing to do with music or being cool.

A glaring example of what’s wrong with Jazz is how people fight over it.

People are too afraid to let go of a name that is killing the spirit of the music.

Life is bigger than music, unless you love and/or play Jazz.

The art, or lack thereof, is just a reflection.

What is Jazz anyway?

When you’re truly creating you don’t have time to think about what to call it.

Who thinks of what they’ll name the baby while they’re fucking?

Playing Jazz is like using the rear-view mirror to drive your car on the freeway.

If you think Jazz is a style of music, you’ll never begin to understand.

It’s ultimately on the musicians.

Not enough artists willing to soldier for their shit.

So do musicians, sadly.

Jazz is a brand.

Jazz ain’t music, it’s marketing, and bad marketing at that.

It has never been, nor will it ever be, music.

Too many musicians and not enough artists.

I believe music to be more of a medium than a brand.

Silence is music, too.

In order for it to be true, one must live it.

Existence is not contingent upon thought.

It’s where you choose to put silence that makes sound music.

I just move blocks of silence around.

The notes are an afterthought.

Silence is what makes music sexy.

and after that has settled in.. I have two things I want to say, hopefully without taking anything from Mr. Payton...

one, I listen to this music every day.. my favorite modern musician calls himself a jazz musician just to thin his herd of potential followers and assure himself of a group of serious listeners.. I think this picture says a lot: 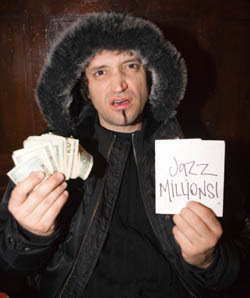 and two... deep breath... as many of you are here as much for gear as for music, every time you read the word jazz in that poem, please replace it with "audiophilia"... I think it makes even more sense... 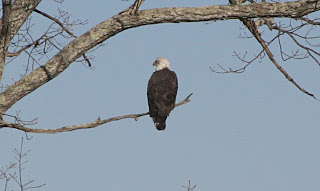 While drinking my coffee and reading my email this morning I saw this sitting in a tree a hundred meters away out of the corner of my eye.

I hope she was checking out the hood and decides to move in.  It would really help with 'critter control' and yellow dog would be the first one cut loose to battle.

(yes I know they mainly eat fish but evolution is real isn't it?)

the coolest variac EVER!

I went to an auction with hopes of picking up a toroid winder and the bidding was crazy.  way over ebay prices but i did come home with the coolest variac I have ever seen. 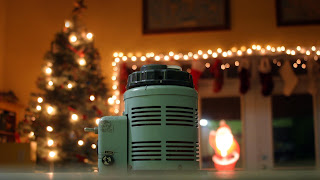 I didn't need another variac and the clean new ones at the auction were going for $150 each.  I guess vintage was lost on the crowd so it was my win.  There were three of them in this lot and if you won the bid for the first one, you had the option to buy the rest at that price.  Novelty has a price and the bid went up to $40 for the pick of the litter and the winner chose the runt. 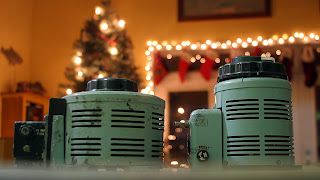 The remaining two from this lot went up under a similar bid situation and at $15 I had the option to take both.  One was a 15A unit and the other was 7.5A unit.  I took both. 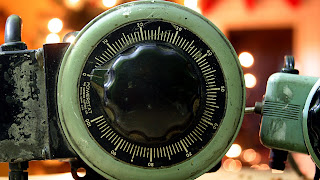 My desire was the smaller unit since unlike the big traditional bakelite knob of 15A unit, the smaller one had a voltage readout feature quite different form the traditional methods. 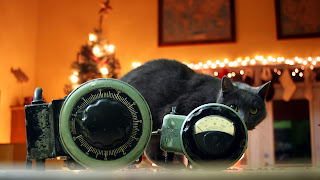 Pay no attention to that cat in the picture and look at the bakelite knobs! 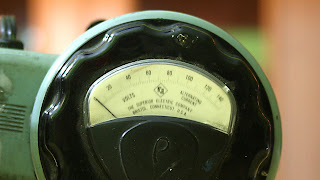 I tried to brag about the cool factor to the scrappers at the auction end and they looked at me like I had three eyes.

Next time JJ needs a haircut.

We need to get together and have an intervention to get JJ a haircut.  The one caveat is it must happen here. 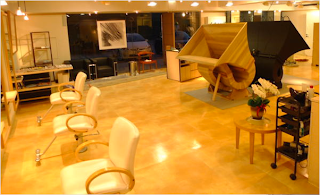 Hit the link and look at the rest of the pics and the paypal address for donations will be live soon.  It is the holiday season and please give freely.  I am working on the whole 503C thing so your gift to getting JJ's hair cut will be a nice tax deduction.

Of course I will have to supervise this trip so even more $$ is needed and after the haircuts... we will need to go somewhere to eat.  Our goal has always been to eat here and the irony of both is perfect so the time is now! 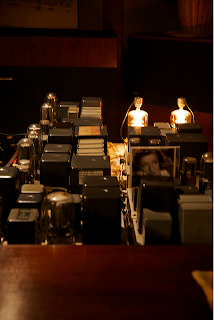 Props go to Sean for finding and sending me the link to Page-Boy and to new family member Casper for his passion.
Posted by dave slagle at 1:52 AM 2 comments: