Back in my younger days in Milwaukee I used to hang out with Arthur Fonzarelli drinking Shotz beer talking about music and all of the cool things in life.  Today we have the interwebs and these conversations now occur worldwide.  One of my good customers in Hong Kong was interested in some SIT (V-fet) amps and with curves like a triode I had to wonder why I have yet to hear a V-fet amp with a nice DHT sound.  I offered to do a pair of nanocrystalline cored transformers for the Tonkin 2SK180 and then things got a bit out of hand.  Here are three pair nano of outputs ready to be packed up. 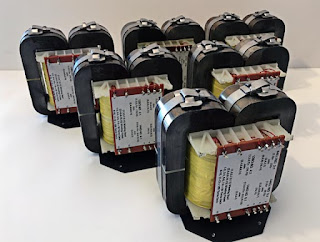 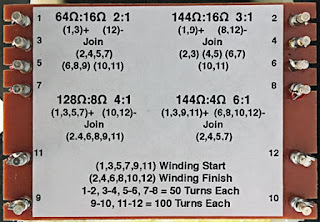 I had the idea that maybe much of the lacking sound I have experienced from my limited exposure to amps with these "triode-esque" devices had to do more with the with the circuit than the devices. We figured the first place to start was the power supply which needed to be choke input with amorphous cored 250mhy 2.5A chokes. 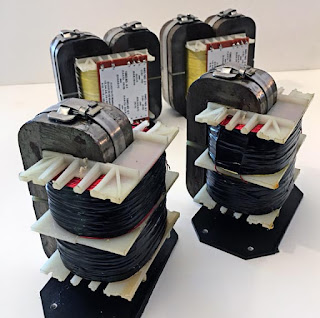 Next came the issue of driving the ungodly 2.5nf of input capacitance these devices have.  Historically an active buffer and fixed bias is used and I figured it was best to go with what was known to work and suggested a 417A into a 49% nickel 4:1 stepdown transformer.  Then it was suggested that maybe a Telefunken RE404 could be used and of course 80% nickel too.  I had spice crunch some numbers and sure enough for this particular case the DHT would do it.  The problem became actually getting a wide bandwidth 200hy @10ma  4:1 done on an 80% core.   Since there will be Coleman regs on the filaments I figured why not run that 450ma of high impedance current through a tertiary winding on the 4:1 to null the current through the primary? 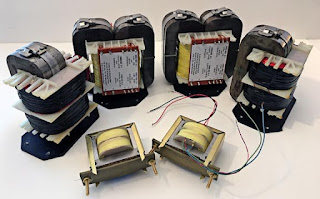 The resulting 4:1's have a 200hy inductance with a window of operation of 7-11ma and when all put together this amp should have -1dB points of just under 20hz to around 40Khz.   Bias for the 2A of output device current will be in the form of a 7-8 ohm source resistor and bypass cap.  In the future this can be compared to fixed bias through the transformer secondary.