I had the good fortune to meet and photograph Prime for the current NFL Sunday ticket campaign.  Everyone involved in the project just seemed to get it and things went so smoothly, I actually switched my TV service back to satellite.

I thankfully survived the hurricane without issues and it was a non-event for me.  I do find some of the sympathy mass emails of goodwill a little too self serving. 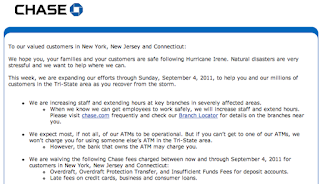 I could go on about the virtual support offered by the man but I would rather suggest they send people rather than email out to actually help.  Sadly, the folks sent out would be unpaid interns armed with silver spoons to clean up this mess suffered by a fellow audio junkie. 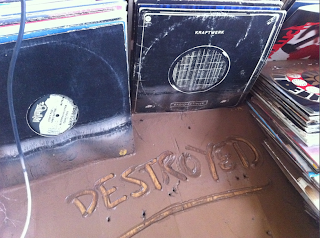 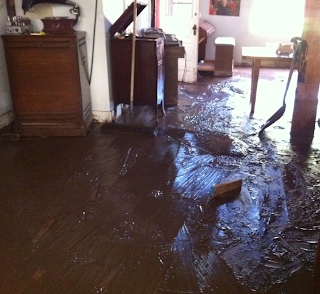 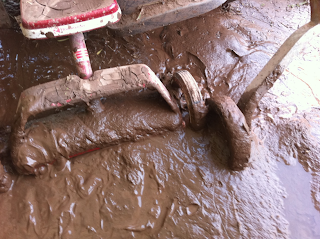 A delivery truck left this sitting in the middle of my driveway.

It was 120 pounds of copper on two spools. 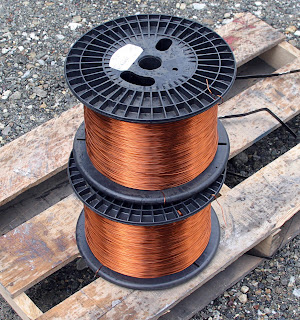 For scale, here is a single 10 pound spool 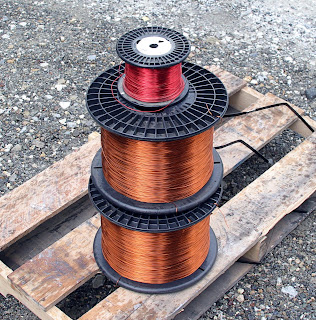 The scary part is in a week the wire will be gone and all we will have to show for it is 8 field coil compression drivers.

On another note, in my attempt to win "father of the year" I recently took the boys to see grandma in Wisconsin.  The oldest was dead tired on the return and was falling asleep on anything he could.  We were on one of the moving walkways and he was asleep.  As we neared the end I had two choices.  Wake him or film it. 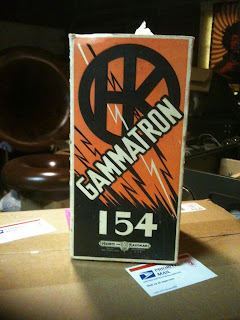 I actually really like their classic logo as seen at the bottom... the "Heintz_HK_Kaufman"... very classic.. but this wild electric HK and Gammatron in black, white, and orange is just phenomenal... one of my favorites...
Posted by Jeffrey W. Jackson at 12:46 AM 3 comments:

we all know the economy of scale and that the title of the post is an oxymoron.  Since we are a bit slow on the uptake and always love a challenge here are a few pics of an oem driver that will be on the AASOA table at RMAF. 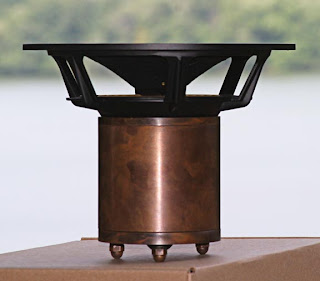 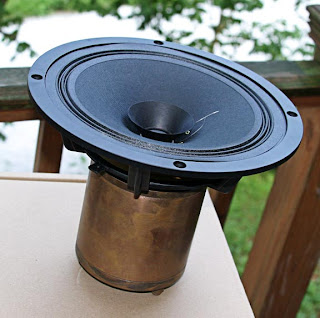 .
school has started back... so productivity has picked up again... but I already miss summer... I like summer.. who doesn't? but the crazy memphis heat and humidity does eventually get to you.. the kids get a little stir crazy.. so we have taken to crashing at Lenny's under the guise of "working on his HiFi".. really just getting up in altitude.. dropping twenty to forty degrees.. and getting in some porch time..

so how about a few pictures? 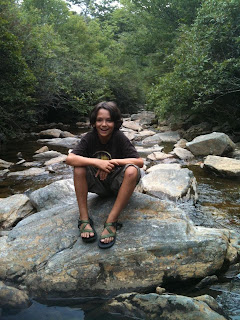 the HiFi we were working on... this is the "social system"... it has to sound good in the kitchen, in the living room, and most importantly, on the porch!

amp tweaking was actually easy.. it turns out the driver stage in his PT Barnum amp could not even clip the output stage, so a quick change and it actually sounded dynamic.. before the changes the volume knob acted a bit more like a compressor/tone control... ahh.. much better now.. 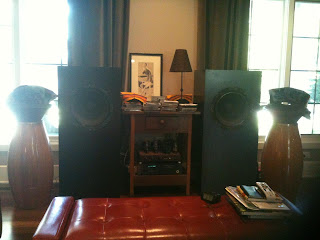 there was a lot of talk about gardens.. but God's gardens just can't be bettered: 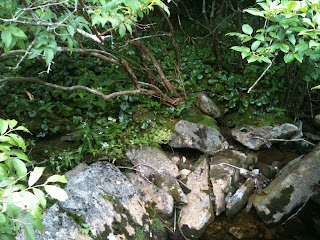 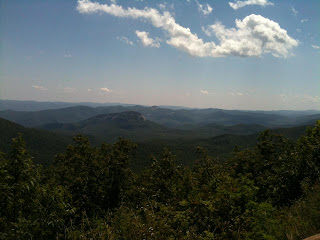 yep.. so a crazy setup until you think it through.... Altec 416 in a big cabinet... original Goto cast horn and Goto alnico 555 (their first product) in conga drum shells up firing... time alignment was actually pretty close.. I measured all of this stuff... and TAD 4001's, with rear covers removed and domes up firing as tweeters.. 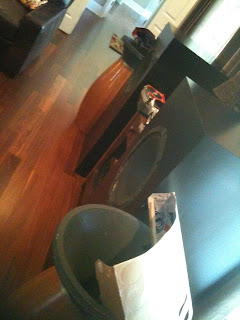 and more of one of the hikes.. what I once again wish I could convey over a computer is the smell... man, oh man! 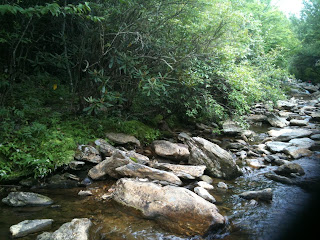 when we first set it up, it just was not really blending well.. so I asked for some scrap cardboard to try out some reflectors... this is what I got in return! probably should not show Goto-San... or maybe he would share a cold PBR on the porch with us? do you think he would dig the Richard Johnston and Elmore James? 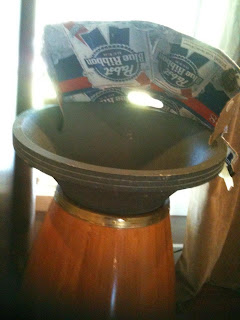 and what a swimming hole! waterfall.. cold refreshing water.. just perfect... far from the 105 with ninety percent humidity that is Memphis... far, far away... 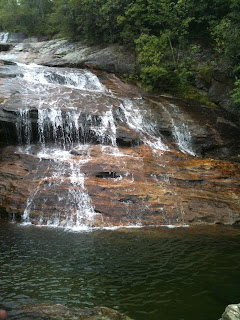 now back to work... with Elmore James in my brain! 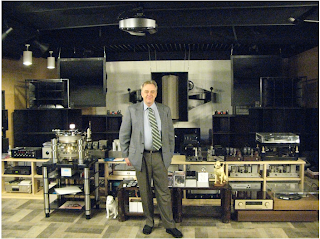 It just kills me how small that 16A in the background looks which just goes to show how insane this system is.   The owner of the system is Mr. K who happens to run a very large Korean cable manufacturer.  The reason this is important is because when the pair of silver autoformers were put in the new silbatone silver signature 300B (come to RMAF and hear it) it became clear that more silver wire that I had on hand was needed.

As it turns out, about a year ago  Mr. K's company bought one of the larger US magnet wire manufacturers and the request was made.  Unfortunately they could not produce the wire but a few days later I was told 5 kilos of silver was headed my way from a third party with help from K. 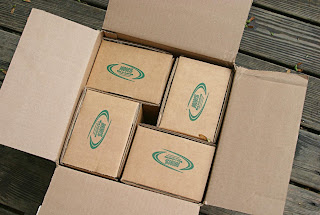 This box showed up the other day via ground service on the big brown truck.  The funniest part of it was no signature was required and it was sitting on my doorstep with this sticker clearly placed on the outside of the box. 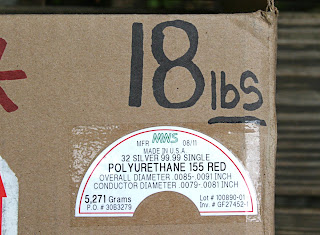 Van Halen called the other day and said it was time for transformer zen. 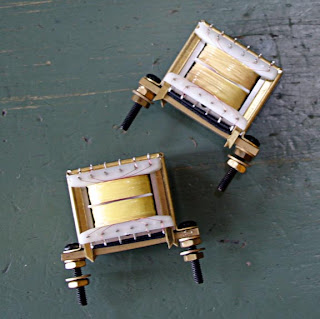 The back story is covered on my forum and gasp... it uses those three legged sand devices. 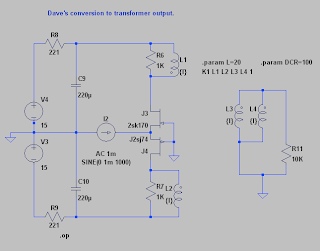 At least this approach gets some capacitors out of the picture and takes advantage of AC summing and DC offsetting so stay tuned.

No audiophile BS here,  just some boob-toob videos and some fun.  JJ sent me a link to the video below and while it is all warm and fuzzy it isn't growing on me yet.

as I clicked on this, something else was spinning in the background that had much more power and meaning to me so I went to the boob to watch the video.


then the rabbit hole hit me with one of the first songs that HIT me with lyrics and music and made me happy about the future.

Now one that brings me to tears about the past.

and one final one... boob tube is now commercial so apologies if there is an ad.

The boys were reading their bedtime books and the younger one was out.  I challenged the older one to quiz me on his new star wars book.  I was humbled when the guy who wore the brown hood wasn't obi wan.  I was perplexed when it wasn't lord vader with the black hood.  I quickly looked for revisionist history and the lack of official info in the front of the book had me thinking Rod Serling would be stepping out with an unfiltered camel in hand to bring things back to reality.

Fortunately, legos can only be manipulated in positive ways so I present you the $100  armrest from the land of... 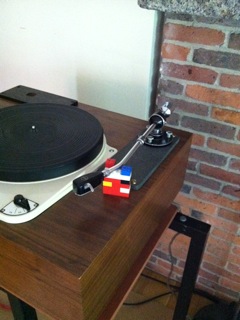