It would seem that something as trivial as a garage door opener would never find its way to these pages but often it is the trivial that gives a glimpse into who a person really was. 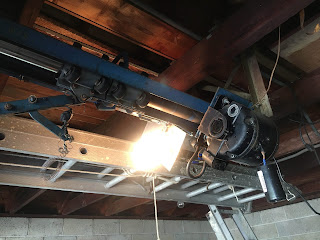 This seemingly Rube Goldberg approach to automatically opening a garage door is a testament to the cleverness that was Dennis R. Hoyer.  I have no idea when this was constructed but given that they date back to 1926 my guess is going to Sears was not an acceptable option for Dennis.

The key to the operation is the drive mechanism and when I first looked at it I simply thought motor pulled the door open and the casters and gravity did the trick to lower the door with the motor providing some resistive force.  Upon further inspection I realized something different was going on since the casters were pointed in the wrong direction. 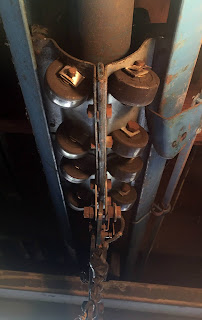 A closer look at the casters quickly refuted my first idea and for a second I though that the outside collar would spin around but when I realized that it was fixed it became clear that this simply operated like a ball screw on a CNC machine. 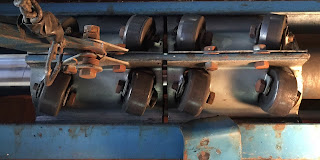 The motor turns the shaft and the casters on the collar were clamped tightly enough and set at a pitch to move the mechanism up or down at the desired rate based on motor speed.  There was a stop at full open and closed but no other safety procedures in place. According to his cousin Damian, if anything were accidentally left in-between the open and closed positions, the results were not pretty.
Most people would have simply driven to Sears but thats not how some of the truly great ones rolled.
Posted by dave slagle at 8:49 AM No comments: