Expanded my bubble with a covid test and a visit for a weekend of listening to cartridge variations in DC. 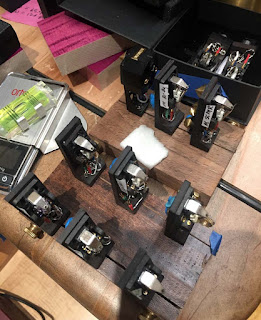 Thus far the cantilever, diamond profile and suspension have been determined so the primary goal of this session was to confirm results of 10 different variations of tieback and coil winding materials. Comparing copper, silver and gold coil wires was interesting and a consistent sonic pattern of behavior is starting to emerge.  The system was Garrard based with my stacked quad57's and the tonearm for the primary swaps was a Schick and then ultimately the winner was installed in the 12" dymondwood "Chunk" and compared to the previous reference in the 16" magnesium "MegaChunk" 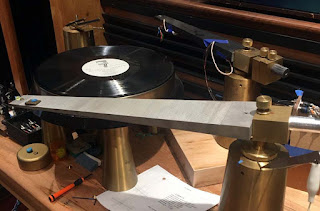 In order to do quick and effective swaps the head shells were all mass loaded to net the same VTF and in the case of the mono carts some substantial mass was required.  Zenith and azimuth were set electrically and the SRA was dialed in by ear for each cartridge to best isolate the variable being compared.  It has become abundantly clear that setup usually dominates the sonic results in comparisons like this so extra care must be taken to assure proper setup.  Once a general feel for the variable being examined was determined the pattern of results correlated nicely to the same set of tests in a different system.  The next step with this batch of cartridges is to repeat the comparison in a third system and then move onto coil formers and magnet types with the ultimate goal being a more finessed version of the field coil. 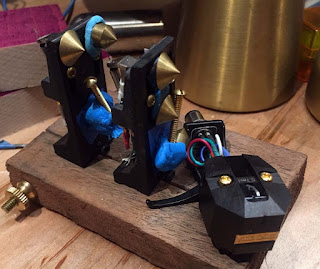