I put the patrol undercover to keep Festivus sacred.  Alas the fatman still showed up for the workers and like the fedex guy, he carried biscuits... Newman... 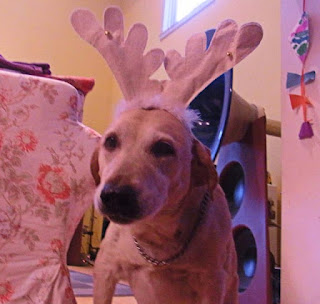 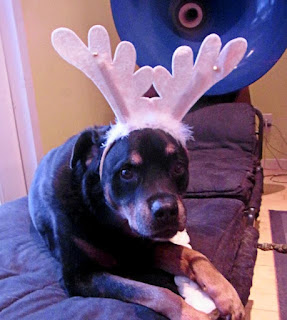 I'll leave you all with a broken reference to a different Elvis and ask What's so funny about peace love and understanding?

May we all laugh more next year than we cry.

I'm Baaack!  Sorry for being absent lateley... lots of projects need to be placed under the Festivus Pole and I had a bout of the 'day job'.  In any event I'm getting caught up and here is the first of a few posts that are in the queue. 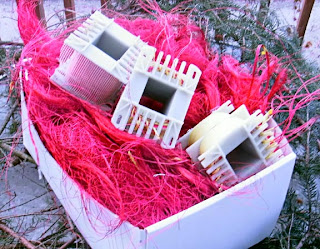 One of the things i keep getting asked for is transformers with multiple taps and my stance has always been that multiple taps or the universal transformer us universally compromised.  Sadly there is very little documentation out there on transformer behavior and it really took me a long time to come to grips with it.

Every transformer I measured with multiple taps had different frequency response for each tap so I simply chose to wind for the best bandwidth I could for a specific situation and people have been happy with the results.  Then I get the email from Bill and Joe at Purity Audio Design for an output for their new flagship parallel 300B amp.  They already use the Chapman autoformer modules in their top tier products.  When they gild the lilly with silver (given a pair of silver chapman modules costs more than most equipment out there) I took their request seriously.

The deal breaker was two fold...  since it was a commercial offering, they needed taps and the switching between taps needed to be user friendly.  Traditionally the units with the worst variation from "tap to tap" are the ones that simply have a ground 4, 8, and 16 ohm tap.  It is clean and easy but from a winding perspective it is far from ideal.  The other traditional solution is to use various series parallel arrangements to allow for different speaker impedances but this is not user friendly.  Since I bring out the winding wire for direct attachment to the binding posts, I do not consider any form of switch in the high current speaker loop to be acceptable.

This takes me back to the picture above and the broken eggs.  That box holds about 45 pounds of scrap copper that this project created through failed experiments.  Luckily the work paid off with a transformer that can deliver 20W (@ 50hz) into 4, 8 or 16 ohms that can be end user adjustable with minimal compromise.   The first thing to look at is the high frequency performance where I get -1dB at better than 40Khz in all three positions and only slight variations in performance from tap to tap.   I also show the results of the actual two transformers sent and am happy with how close they match each other. 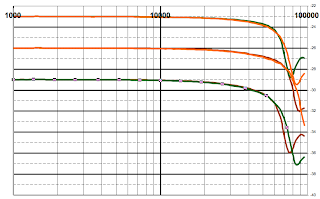 The low end is much simpler and at 160ma + the 20W@50hz signal the inductance is still linear and will give a -1dB point of 10hz or slightly below when driven by parallel 300b's which will put any claims of amorphous cored transformers having weak bass to rest once and for all.

I'll leave you with some pics of the things that live under the "pretty cans" and then get back into character with a give away. 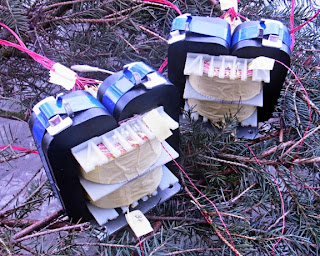 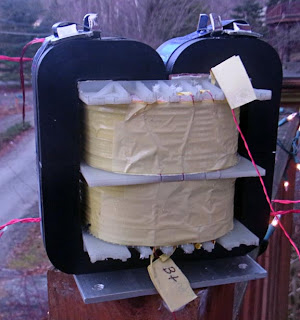 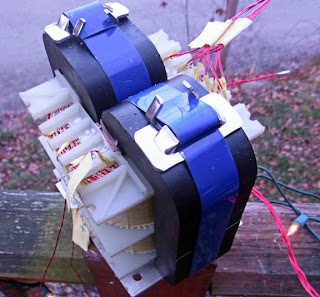 Wow... that was long and boring and totally uncharacteristic for me so I'll get back into character for the giveaway.  Long time readers will remember the post about "ghost bunny" having respect for morgans book.  Alas the bunny has been gone for nearly two years now and that very book he protected has been soiled by a cat.  So if anyone wants a free copy (possibly with a cat) I'll gladly post it anywhere in the world for free. 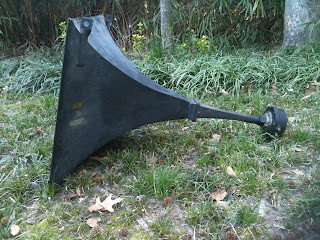 Are you beginning to see why I call it Omahaul yet?  All of this came out of a theatre in Omaha, Nebraska that they tore down in the 80's.  I got all of this gear from the guy who carted it all out himself.  When he told me this story, I was of course enthralled.  Long into the conversation, he got kinda quiet.... started looking at his feet.. I knew the *ouch* was coming... so he says, "and there were some woofers... but they were so heavy that I got tired of moving them around... so I got rid of them a few years back...".. and by "got rid of them" I could tell from his delivery that he gave them away.... I am picturing some car stereo kid trying to get those 18" drivers into his hatchback... and with no field coil hooked up, he got no sound.. and probably just put them on the curb for trash pickup... and so it goes.... ... .... 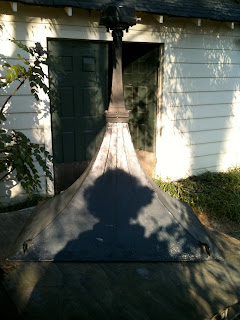 but I got this horn.. along with the longer 19-C receiver for 555's.... and it sounds fabulous.. just super fabulous... you would think the sheet metal would ring too much.. but it doesn't... sure, I am in a relatively small room, and that does help keep power input and therefore the power down, but it really sounds very free and open... a great horn.. I am privileged to get to listen to it on a regular basis... feel free to drop in and share some album sides... 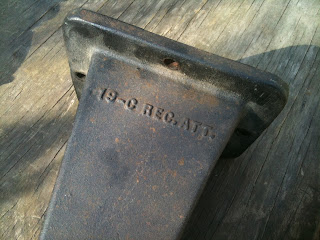 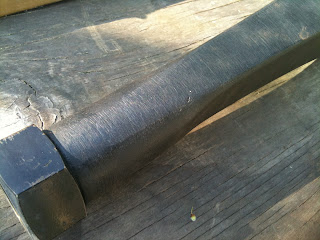 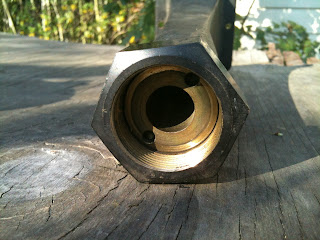 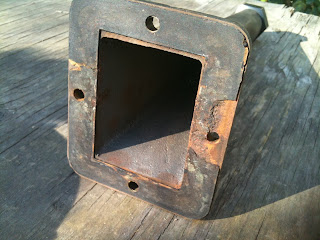 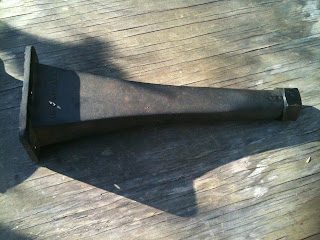 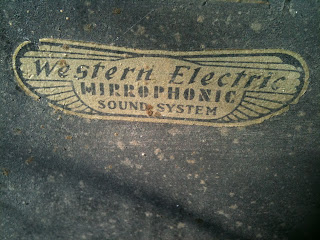 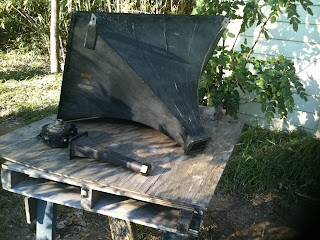 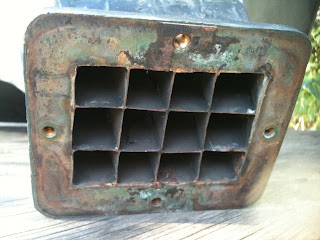 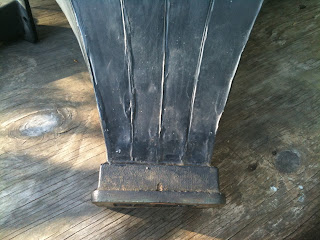 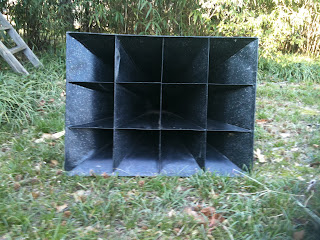 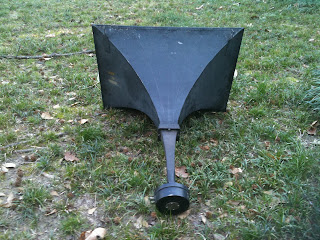 I did take some indoor measurements... not perfect, but good.. if I ever take it down I will measure outdoors and post... and I did run some numbers on the flare... it is in the 200Hz range... the mouth flares quite fast at the mouth.. more like a tractrix... I suspect that has something to do with the big sound... and a 597 tweeter just blends perfectly... not that you would expect anything less from Wente and Thuras... 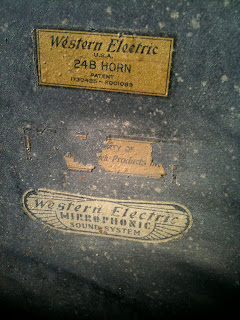 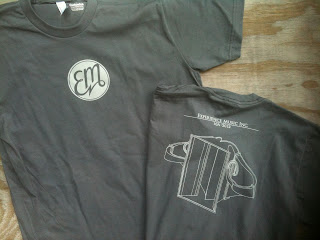 ok... by popular demand... and likely because Iain went public, these now legendary shirts that have been seen on celebrities (what up, Holger!.. what up, Schick!) all over the world are now available to mere mortals like you, our beloved reader... 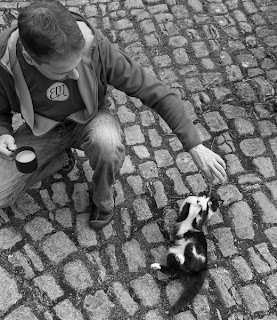 they are US$25 each.. a flat $10 will get as many as you want delivered to your door anywhere in the world... that is just to keep this simple.. I am already going to have to bribe my kids to stuff and label.. good old fashioned child labor... 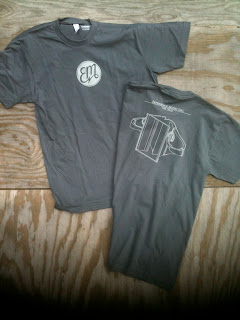