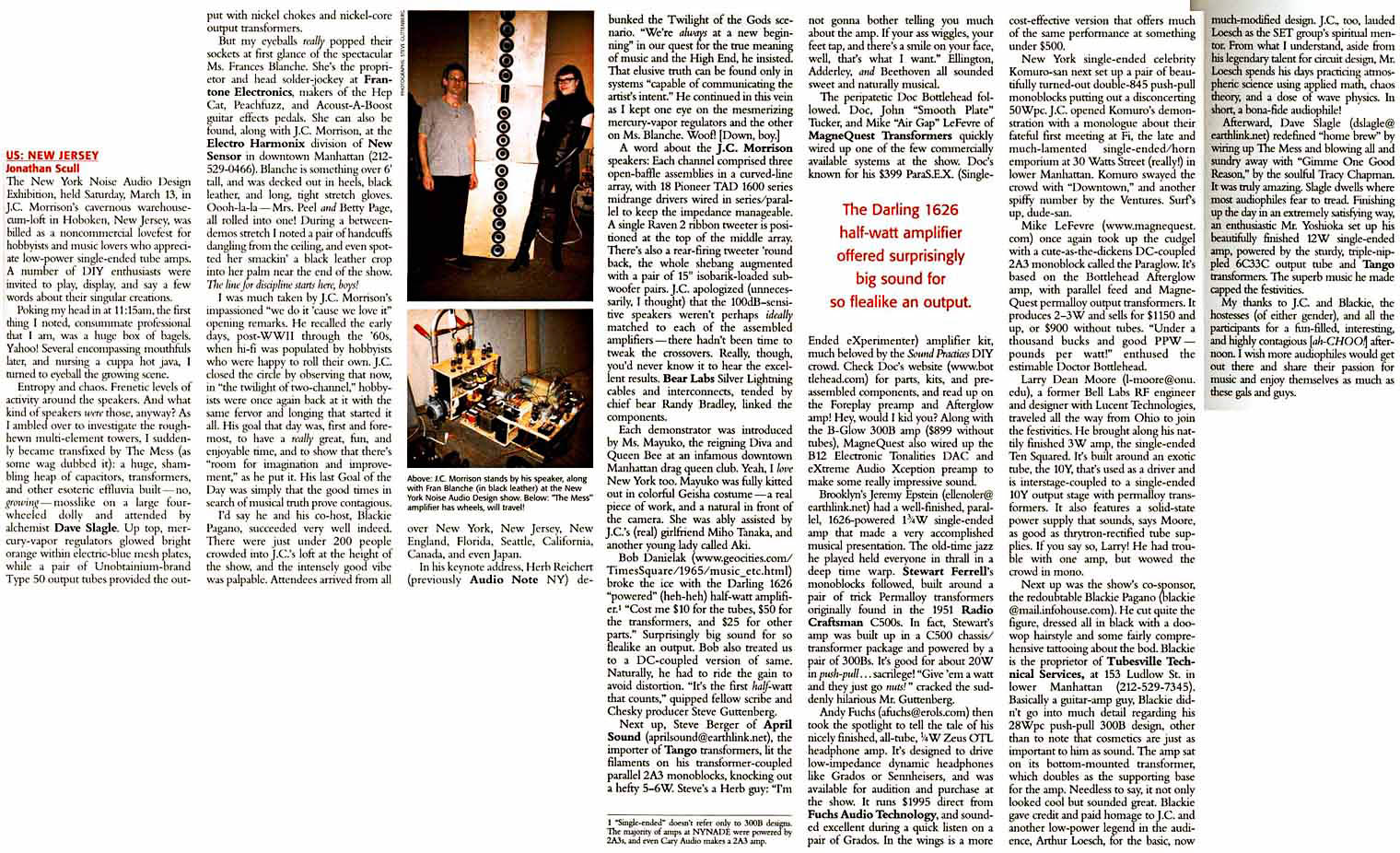 
So, a short while back, that has since turned into a long time, I shows up at Clip's place with assorted beers, which previous experience suggests works better than "Open sesame". Seeing as this a blog on stereos, let's get the beer thing out of the way first. Top tip: avoid smoked beer. Raising a bottle to my lips, it smelled of BBQ. "Strange," I thought, but interesting. Damn near tasted of BBQ too, but alas, closer to ashtray.

Thankfully, the remainder of the selection met with our approval. On to the sounds...

Let's begin with a disclaimer: as with all vicarious accounts of sonics, particularly those online, your prior position should be that I can't be trusted. Let me assuage some of your doubts. First, I am a *very* experienced listener, in fact, I have been listening for pretty much my entire life, beginning inside the womb, actually. Which, incidentally, is good for Lowther shout (more of which later).

Secondly, as my Q-tips will attest, I am quite the golden ear.

Anyways, the great thing about visiting Clips is your never quite sure what he's going to serve up. In my case, the speakers were the EMIA Field Coil Lowthers on rear loaded horns, driven by a 4304CB amp. Clips spun a record.
Initial impression: what the hell? These Lowthers were -somehow - smooth. Wha? Ordinarily, I'm not a fan of "fullrange" drivers, and in particular, *lowth* anything with a whizzer, but in this case, the usual banshee howl was gone. In its place: velvety, microtextured, gentle and relaxed (i.e. correct) sonics. Really very nice indeed. That field coil must be doing a lot more to the Lowther than just running a few lines of flux through its steel gizzards.

Again - I think the concept of a one-way speaker is a non-starter, at least for the stuff I like to listen to, but I would *gladly* build a front-horn loaded system around these puppies providing the midrange.  I know that since my visit, they've been played in the big Azuras and relieved of bass duty. Would love to hear that setup some time.

Another beer interlude, and now that I had loosened up, Dave proceeded to fuck me up. To clarify: he asked me to compare two autoformer volume controls, identical save for the windings - one copper, one silver. I listened in that order, thinking, yeah, I'm probably gonna struggle to hear the difference, but I might probably convince myself that the silver sounds brighter up top, and confidently relay that back to him, so as to preserve some measure of Aural Cred with the EMIA boys and - erm - that's it.

No. No way. Not in a thousand years.

This messed me up. First thought was that the silver sounded just a little bit duller. A few seconds later: it's actually quite a lot softer, more relaxed - in a good way. A short while later, and I'm relaxed, enjoying "This one's for Blanton" -(incidentally, I gather this is a bit of an audio cliche disc, but having not heard it before, I actually really liked it). Just as I'm zoning out, Dave shouts from the control room (upstairs): would I like to switch back to the copper? Well, this ain't the time for enjoying the music, this is the time to figure how to enjoy the music more in future. So...

Back to the copper. It now sounded harsh and disjointed, almost distorted by comparison. A bit of back and forth... it was easy to pick out which -  I asked Dave to switch stuff randomly and "blind" to make sure.

This, my fellow junkies, has so messed me up that it has even got me thinking of going scorched earth for OTL, for the simple reason that I can't afford the good stuff... and the thing is, the copper actually sounds quite lovely until you hear otherwise.

Confession: my textile ears have never been much good at picking out differences between passive components. It's probably why I love playing with different speaker drivers over other stuff. This, OTOH, was so damned obvious that I dread to think how miles apart MC step-ups in Ag vs Cu might be.

I don't want to think about this any more, at least, not until Silver hits 3 bucks an ounce again. Yah.

More beers, more records, a bit of post-midnight meat (ribeye and peppers on the grill). I'm absolutely zonked and ready to crash, but somehow, Clips persuades me that - at 2:30am -  it would be a capital idea to stack some 80% nickel lams into some bobbins (thankfully, already wound and around), and compare to the amorphous outputs we had been listening to...the previous day.

Now I know why this site is called what it is. I must have inhaled 3 lungfuls of the mysterious fine powder that the lams came coated with. Clips assured me it was the manufacturer's proprietary coating - gotta admit, it made sense - you want high resistivity between laminations, that's the whole point of lams in the first place, and what keeps your transformer eddy current losses low, but erm, don't most guys apply some kind of varnish or lacquer coating? Hmmmm....

Dave checks the gap and characteristics on the bridge, pronounces the transformers healthy, and one of us has to wire these OPTs into the amp running at 1kV... ok, so my bronchioles are now nicely lined with lam powder and there's therefore no way a current can conduct across my chest, but not for nothing do they call him Clips. I return to the listening chair downstairs.

I've been rambling, so long story short. Amorphous: clean, crisp leading edge, clear. Nickel: big, billowing soundstage, very relaxed, built for comfort not speed.
*Somewhat* like copper vs silver respectively; but here - as Dave is fond of saying - we are talking a difference in flavour. In the former case (geddit?) - the silver/copper thing is more like eating your food vs having it delivered through a tube.

This has me thinking that an amorphous/silver combo might have a very, very interesting blend of sonics, but for now, I am confident that ye brethren would be absolutely delighted with 80% nickel. 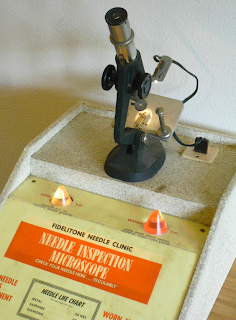 This one came from a most unexpected source.  I was bored and checking out all of the old familiar places when someone suddenly mentioned a "Mystery Retipper". Knowing most of the usual suspects,  I took a peek and the guy is in Seattle.  The two things that caught me from his bare bones site were the fact that he also repaired watches and the picture of the Fidelitone Needle Clinic.

To this day I never knew there was a "drug store needle tester"  and this thing just looks awesome. 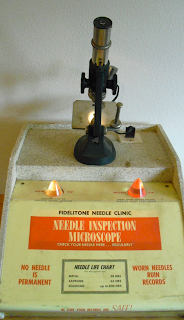 I really didn't want to call the guy for permission to use his pictures but 20 minutes of searching for this unique device had me dialing the phone.  Chong answered the phone and we chatted a bit. The thing that  impressed me from the entire conversation of cartridges, cantilever materials and stylus profiles was his pride in owning this "souvenir" 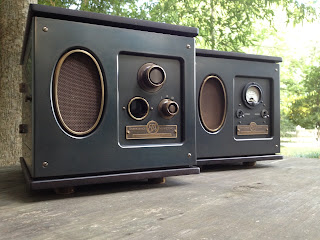 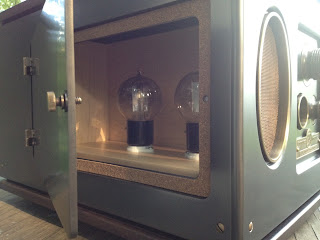 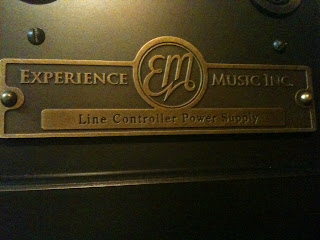 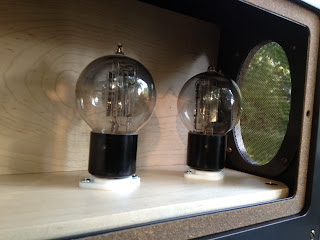 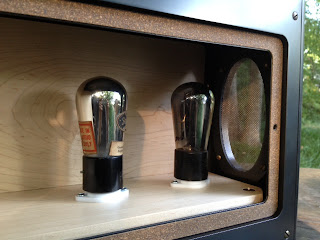 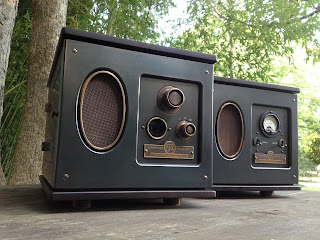 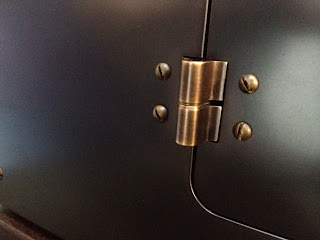 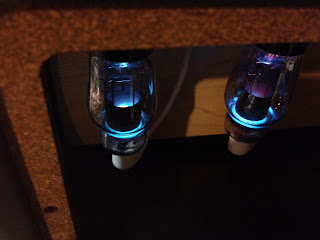 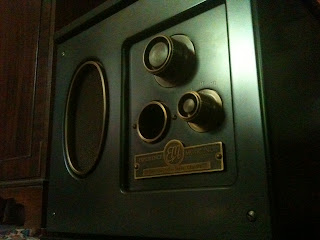 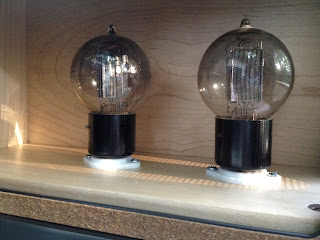 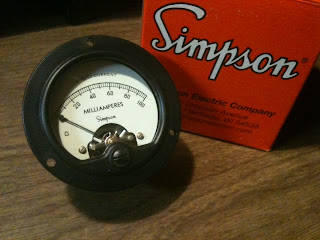 and the filament glow.... 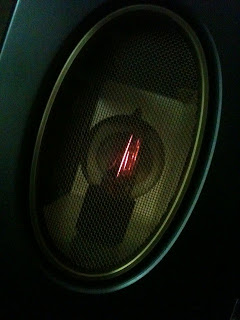 I finally picked up a milling machine that will fit into my already cramped workspace.  It was a good deal.... you know used only to drive to church by a little old lady in Pasedena.  Gotta love craigslist. 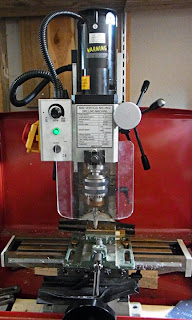 After my return from the land of walter, the field coil cartridge moved to the top of the heap and this thing showed up to empower me.  Life has kept me from actually using it but yesterday I woke up with a purpose... i wanted to make a stylus!

OK I made a scale model of a stylus and unlike cars or planes, this model went in the other direction. 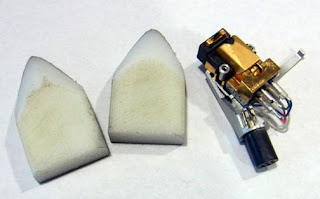 It seems a lot of people have the notion that the new way to set SRA is by using a USB microscope.  Well I have seen some sincere abuse of this and came up with the observation that if you do not have the lens perfectly centered perpendicular to the contact facets, your measurements will be off.

Before going public with this I needed to actually prove it to myself and hence the split "slagle" contour above.  The split was key so I could see through the contact edges and make sure the camera allignment was correct for my test. 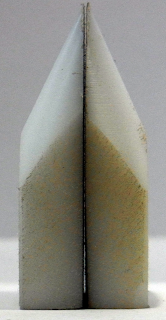 that small bit of light tells me I am in the right position and the lack of uniformity of the gap tells me not to quit my day job...oops  nevermind.  Now lets provide some measurements of this beast. 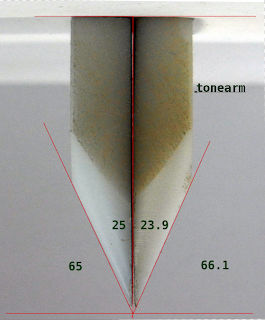 I placed my contact line at 90 degrees and measured the angles on either side.  Guess what... I really need to pay more attention to my day job.  Beyond that, I also realized how difficult preciison measuring is and I am actually content with the results of both my machining and measurement errors.

Here is the rub.  What happens if you are even a bit off center?  I shifted the camera to the left a bit to see what happens to the "slagle" profile. You can see the degree that I am off center by viewing into the side of the model. 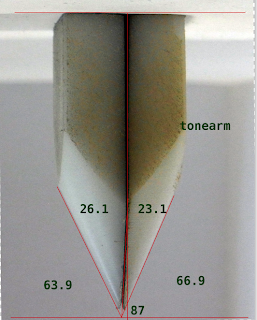 Now the total shift may seem extreme and it was an inch or so but remember that we are dealing with a total dimension of only a few thousandths of an inch any shift of the camera is extreme.

I did my best to keep the SRA at a perfect 90 degrees but now notice that due to the camera being off center, the SRA line is now appears to be 87 degrees even though it is still actually 90 degrees.

I chose the symmetrical "slagle" stylus profile for this to make it easy but even with asymmetrical designs the point remains.  Unless you have both the left and right contact points of the stylus in in a straight line to the center point of the lens, any measurements made from the image will be incorrect.  Furthermore,  the image capture plane must be at exactly 90 degrees to the center line or things can get wonky again.

Personally,  I am happy setting the VTA by ear so I enjoy the music and believe introducing a flawed measurement system puts us back into the dark ages of audio.