JJ and I have been talking back and fourth about doing a tricked out "cheap" phono stage and we both plan on showing our versions at the LSAF. The initial goal was to fix everything that is so wrong about the RCA circuit and then do a simple circuit board and parts list so Joe DIY'er could have an affordable and great sounding phono stage. Our intent is to simply publish the info and offer initial support through a forum and then step back and see where it goes. The circuit is really simple, direct coupled and has no series elements. (plate of the pentode connects directly to the grid of the output tube. Gain is about 40dB and the pentode input makes it ripe for a SUT.

Prior to doing the board version, we each had to build and listen to these things. Jeffrey being the formally trained purist (pragmatist) decided to source everything from allied (except the tubes) so the end builder can simply fax or email in an order sheet. While this was necessary, I tried to take the other approach and wanted to build my version entirely with stuff in my junkbox. What fun would it be to listen to two of the same things anyways. Our goal is a final format that is easy and cheap for the end user to build and ripe for upgrades. 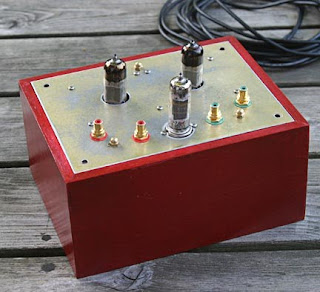 ok... I have to admit that I really cheated and the pic above is just the signal stuff. For the PS I stole a trick from Arthur and simply used a pair of Genrad supplies I had on hand. The input tubes are powered by a 1201 which is regulated and the output tube is powered by a linear 1203. Unfortunately upon looking inside the 1203 I was disdained by the ancient dual section cap and 170 ohm decoupling resistor. A few swipes of the soldering wand and a couple of THSA's and an 80% nickel PS choke were under the hood. 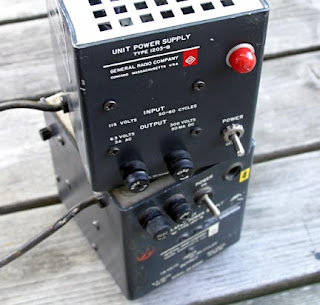 To come totally clean, while I did have the THSA's, 80% nickel chokes and 15 foot 4 pin connectors in my parts bin from failed projects, I did have to order a few resistors and scam some .32uf oil caps off ebay so you can now all call me a dirty cheater. To be honest, I think the oil caps may be a bit much and do have some off the shelf plastic caps to swap them out with at the show. 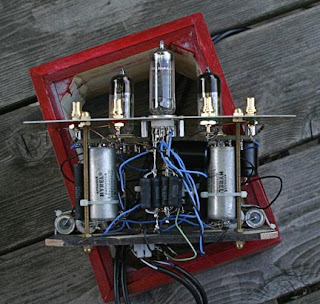 I hope my copious use of Kimber TCSS and 3D layout will prove to y'all that I am not a slacker and intend to wipe the street with this bad boy and my last task is figuring how to fit some wheels to it to keep my traditional style going.

As a final note (apologies for the preaching), I really think the concept of LSAF is genuine and pure since unlike all of the other shows, it is motivated by passion and not $$$. I think you should all think about the possibility of bringing a show like this to a neighborhood near you.
Posted by dave slagle at 9:45 PM