In honor of Papa Joe's "Meet the Tube" series from Sound Practices, (You *ALL* have a copy of this, correct?) I would like to offer up "From the Stash."

I have mentioned our Stash tube today quite a few times over the years, yet I have not seen anyone using it. Maybe it is just too rare, but I think it is more that people just don't recognize it. 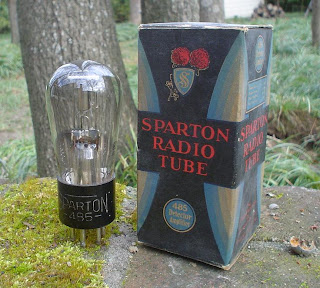 So what is this tube? Well, it is an indirectly heated triode. Rarely will you see me write about an indirectly heated tube, but this one is nice... maybe my favorite indirectly heated tube. The gain, at about 13, is high for an ancient tube (1920's), but it is certainly not high by even 1940's standards. The plate resistance is low enough to load with a nice nickel plate choke or even a nickel bifilar 1:1 interstage transformer. For full specs and plate curves, just use the 56 numbers as they nearly overlap. I really consider this tube a 3V type 56. 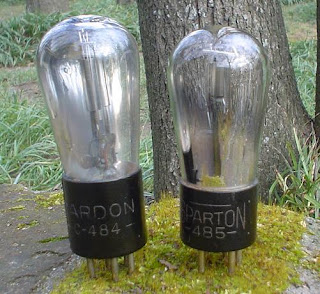 To the best of my knowledge, the tube was made by Sparton, Cardon, Tung-Sol, and Sylvania. I have only seen the old globes from Sparton/Cardon. I think that Tung-Sol and Sylvania just made them as replacements for Sparton sets after they went under. The early versions are also seen under the number 484, and often have a longer plate.

The catch, if there is one, is that they are often used pulls that are worn out. I have about a one in three or four success rate with them. So even though they are dirt cheap, you do need to be prepared to stalk eBay for a year or so to gather up the six or eight to build an amp around them. 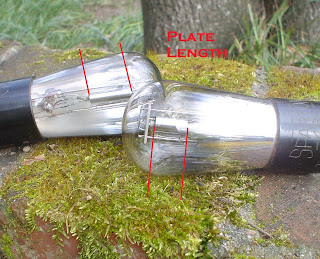 So where to use a tube with some gain, but not much? Well, I have used it as phono stage output, just don't strap a fifty foot interconnect to it. I have also used it as a driver with high mu output tubes like the 304tl, which itself has a gain of 12. But I think the best application for this tube is in the input slot of a three stage amplifier. I rarely build three stage amps, but if you have a speaker that is not 110dB horns, you may need that third stage of gain. It allows for a really beefy driver for that transmitting tube output stage, and makes up the gain difference of the speakers.

So, as is always the rule with rare and precious things, no hoarding, but please buy and try.. these make music...