Houston we have sound. 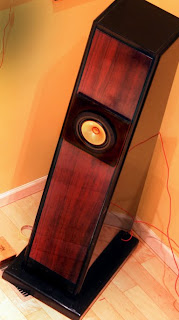 Got the field coil Alpair 12's finished late Friday night and Saturday was dedicated to getting them mounted in a pair of Bob Spence's  enclosures designed by Johan van Zyl.  It was Bob who originally contacted me about this project and he introduced me to Mark Fenlon.  JJ hauled these cabinets up to me last July and we barely had enough time to compare the Neo, alnico, and field coil 5" lowthers.  I lived with the field coil 5" units for about three months and the alnico ones ever since.  Here is what the cabinets looked like before the "swap" started.

OK I'll be the first to admit it was a hack job, but the hole was 6" so it needed to be sized down for the 5" driver.  The Alpair 12 required a 6.5" hole and while I was at it I decided to open it up to 7.5" so I can also mount an 8" lowther.  I did a marginally better job with the new adapter plates but when it comes down to it, time is more important to me than looks so they were MDF lightly sanded and painted with 1/4 a rattle can of black gloss paint. (I was not running out to get another can) 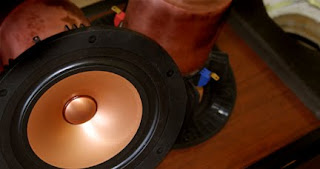 I typically would take the copper of the motors dark, but for this I liked the feel of the copper motor and the copper colored cone so I just worked the finish slightly to give a bit of feel to it and moved on.

By about 5PM I had one driver mounted and playing and I started working on the other cabinet.  It would have been about 4pm but I decided to try out Gorilla Glue to hold the motor support in place instead of 5 minute Epoxy and I didn't realize the 1 hour clamp time.

Driver upright and playing and the other was in place about an hour after.  Of course the $64K question is how is the sound and I'll have to take a pass on that for the moment for three reasons.  First, these basket structures need to be treated gently during the first 20 hours of play and then gradually ramped up during the next 80 or so hours.  Apparently hitting them hard out of the box leads to interesting deformations of the cones.  Mark's "break -in"  instructions found here  If not followed,
The second reason I cannot comment on the sound even though I am past the 20 hour mark is I need to swap in some bigger tubes.  I suspect some severe 2nd order distortion (clipping) will not help the cause and since  2A3's barely cut it with the lowthers so I'm going to need to swap in 75TL's or triode wired 4-65's at some point next week.
The final reason I cannot comment on the sound is because I am using iTunes through a crappy DAC.  There is no way I'll ever get these things broken in attempting to cue up vinyl 24/7.
I did stay up late last night and played with a variac on my lap adjusting the field strength while listening.  I was shocked even at low levels how much the tone could be changed by twiddling the knob.  It reminded me of how when Bob was here with the permanent magnet Alpair 12's how we had to adjust the position to tune the corner loading except I was doing it with current through the field coil rather than placement of the speaker with relation to the room corners.   I'll update things in a week or so after I get 100 hours of random digital into it and let you know how things are going.
Posted by dave slagle at 10:39 PM