Everyone works in a different way.  Some people are perfectionists and others just want to git 'er done.  I think the key is to stand back and identify the goal of a certain situation and then decide the best way to obtain that goal.  Oddly enough we live in such a linear society that it seems everything must be presented from start to finish and for this case, I'm going to do the opposite to give a better glimpse on the actual process of a 30 minute window of time.

After RMAF we were up in fort collins and rolling in a New Fostex T500a supertweeter to go "above" some lowthers in 160hz azurahorns.  When I say "Above" I am referring to from circa 10KHZ and up and not physical positioning.  Traditionally the tweets have resided inside the speakers on a shelf (offset on the horizontal plane).  I'll leave all of the discussion of theory out of this and simply state the goal was to align the new tweeters in the vertical plane and let that story play out. 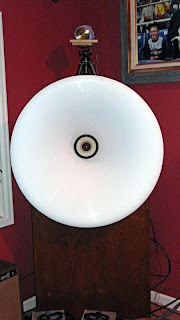 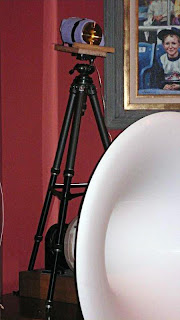 Essentially the goal was to elevate the tweeters above the horns in the vertical plane for a quick evaluation.  We needed about a metre of height and an adjustable base.  The original idea was simple barstools and shims but that would require an time wasting outside trip.  Christophe suggested tripods and fortunately several gitzos were onsite.   What follows is not pretty so women, children and audiophiles should probably not see it but the rest of you need to know.
Placing the T500 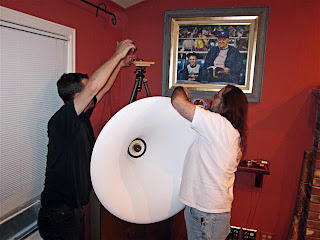 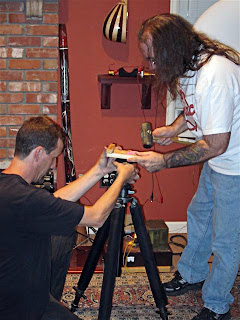 Keeping a round tweeter from rolling 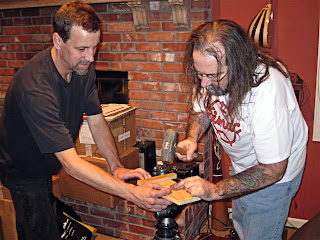 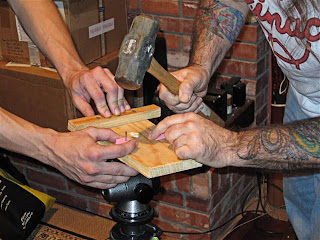 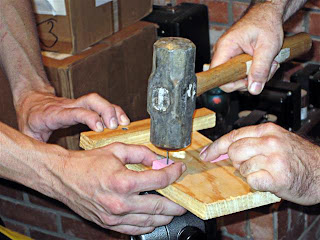 The entire story if polished, could be an article in a high end rag with names, dates and quotes. The essence of the situation is the quick and ugly proof of concept implementation solidified a concept the core family members understood.

The most important result was a group of friends from far away locations were listening to music together and discussing sound with the same source rather than phoning it in.
Posted by dave slagle at 12:20 AM